Merle Fahrholz and Alvaro Schoeck have worked out the concept of Catching fire – Haendel on the Road. They are also jointly responsible for the artistic direction and the general management of the project series.

MERLE FAHRHOLZ is a dramaturgist for musical theatre at the Nationaltheater Mannheim (Germany) where she is also responsible for Young Opera productions. Whilst working at the Theater Biel Solothurn (Switzerland) she has collaborated with Pro Helvetia and the University of Zurich in several arts educational projects, including a one-year long project on Il Trovatore with over 200 pupils. Her interest in the work with young people has been founded during her trainee year at the Metropolitan Opera (New York) where she has been working in the educational department. Merle Fahrholz, Nationaltheater Mannheim

ALVARO SCHOECK is a Swiss theatre and opera director, who studied at the University of Music Hanns Eisler (Berlin). He works as a director in Germany and Switzerland and also has staged several productions with young students in local schools. 2009 he has been the first director of a Richard-Wagner-adaption for children (Der fliegende Holländer) to be shown during the Wagner-Festival of Bayreuth, which has led to a lasting cooperation. From 2002 till 2009 he has been a member of the leading team of the Camp for Cultural Exchange, Respect and Tolerance, the International Summercamp Sombor. www.alvaroschoeck.net

Marijana Mijanovic is responsible for the musical coaching of the singers. 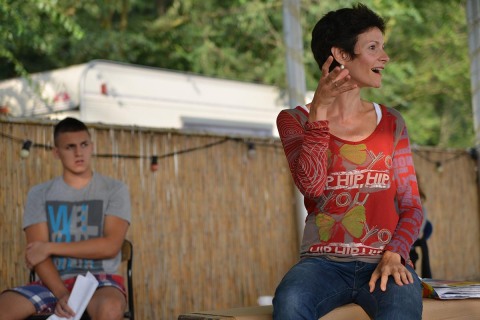 The contralto Marijana Mijanovic was born in Serbia. As a baroque specialist, she has performed at opera houses such as the Palais Garnier (Paris), the Theater an der Wien (Vienna), the Théâtre de la Monnaie (Brussels) and the Zurich Opera House, as well as Festivals such as the Festival d’Aix-en-Provence, the Glyndebourne Opera Festival and the Salzburg Festival. She has worked with the conductors William Christie, Alan Curtis, Paul McCreesh and Marc Minkowski.
In recent years, she has been increasingly involved with teaching, most notably in collaboration with the Serbian-American conductor and harpsichordist Predrag Gosta, with whom she regularly presents workshops and opera performances under the auspices of the Belgrade Baroque Academy and the New Belgrade Opera.

Francesco Damiani studied piano, composition and conducting in Italy and Germany. He conducted several orchestras in Italy, Germany, the USA and South Korea. Since 2014 he is engaged as assistant of the choir director and musical director of the Young Opera department at the Nationaltheater Mannheim. Furthermore he is a founding member of the ensemble “Musicarchetipi” and engages himself for the staging of new music and world premieres.

Predrag Gosta was born in Belgrade and currently lives in the USA. Having completed his undergraduate and postgraduate studies in voice, harpsichord and conducting at Trinity College of Music in London and Georgia State University in Atlanta, he is currently recognized as one of the leading experts in the historically informed performance practice. He is the Artistic Director of the early music ensemble New Trinity Baroque, and has conducted orchestras such as the London Symphony Orchestra, the National Philharmonic in Washington DC and the Russian National Orchestra in Moscow. In Serbia, he is the Managing and Artistic Director of the New Belgrade Opera, the Belgrade Baroque Academy and the Studio for Early Music, as well as the Belgrade International Early Music Festival. www.predraggosta.com

Anabel Heiden is a grammar school teacher for German and Spanish language and literature with a broad experience in theatre work. After acting in a semi-profesional theatre group and an internship at the Young Theatre departement of the National Theatre of Mannheim (Germany) she is now leading her school’s drama group and works whith children between 13 and 19 years. Due to a cooperation of the school’s drama working group and the National Theatre of Mannheim, Anabel was introduced to Merle Farholz and Johannes Gaudet whith whom she worked in a theatre performance project whith young people.

Robin Phillips studied piano in South Africa and London. Since the year 2000 he works as a répétiteur at theatres such as the Südthüringisches Staatstheater Meiningen and the Badisches Staatstheater Karlsruhe. He was also engaged at the University of Arts Zurich, where he was the musical leader of several productions with students. Since 2012 he is engaged as répétiteur and Stellvertretender Studienleiter at the Nationaltheater Mannheim.

Primarily educated as a teacher, Veronica Peyer added studies in theatre education at the Universities of Art in Bern and Berlin. She mainly worked as high school teacher, but also as assistant director at the Theater Biel Solothurn, where she staged the children opera “D’Horchhäxe”. She was responsible for the work with the students in educational projects at the Theater Biel Solothurn, such as “Varietà – L’altro Trovatore” and “Wunder: Herkunft unsicher. Wege zu La Cecchina”.

Georg Schütky was a member of the Vienna Boys Choir before studying opera direction at the University of Music Hanns Eisler (Berlin). In 2012 he has staged the cantata Ich hatte viel Bekümmernis (Johann Sebastian Bach) at the Opera Leipzig, in 2013 he jointly created with Johannes Schütz a widely renowned performance of Ariodante (Georg Frederic Haendel) at the Salzburg State Theatre. In the summer of 2014 he staged the opera Der Freischütz (Carl Maria von Weber) as an open-air production at the Burg Gars in Austria.

JOHANNES GAUDET works in the Young Opera department of the National Theatre of Mannheim (Germany). He is responsible for young audience development and music education. He is regularly giving workshops to children and young people but also working together with composers and opera directors on the creation of modern music theatre for young audiences. He is a professional percussionist and has also worked as musician and music director for the Theatre Freiburg (Germany).

GEORG SCHÜTKY was a member of the Vienna Boys Choir before studying opera direction at the University of Music Hanns Eisler (Berlin). In 2012 he has staged the cantata Ich hatte viel Bekümmernis (Johann Sebastian Bach) at the Opera Leipzig, in 2013 he jointly created with Johannes Schütz a widely renowned performance of Ariodante (Georg Frederic Haendel) at the Salzburg State Theatre. In the summer of 2014 he staged the opera Der Freischütz (Carl Maria von Weber) as an open-air production at the Burg Gars in Austria.

The Red Cross Sombor is the host of the International Summercamp Sombor.

The INTERNATIONAL SUMMERCAMP SOMBOR is a place where different cultures meet and mutual understanding is developed. 80 young people from the countries of former Yugoslavia and the rest of Europe meet during ten days in the summer. The program gives them many possibilities to explore different forms of communication. The participants are invited, to express themselves, to exchange opinions, be creative, have fun, develop ideas and visions, make friendships and do sports.